SCHOOLS THAT LAST
​​​If it sounds too good to be true...
Here's the subject line of an email I received from Seeking Alpha on Dec 4, 2018:

"The Trading Strategy That Beat The S&P 500 By 16+ Percentage Points Per Year Since 1928"
​
Sounds crazy, right?  But it appears to be true - well, at least since 1954, the earliest data I had to backtest the strategy.

The trading strategy is a simple, 2X levered momentum strategy.  Below compares the total return indices of the S&P 500, and this strategy as of Dec 3, 2018 when the article was published: 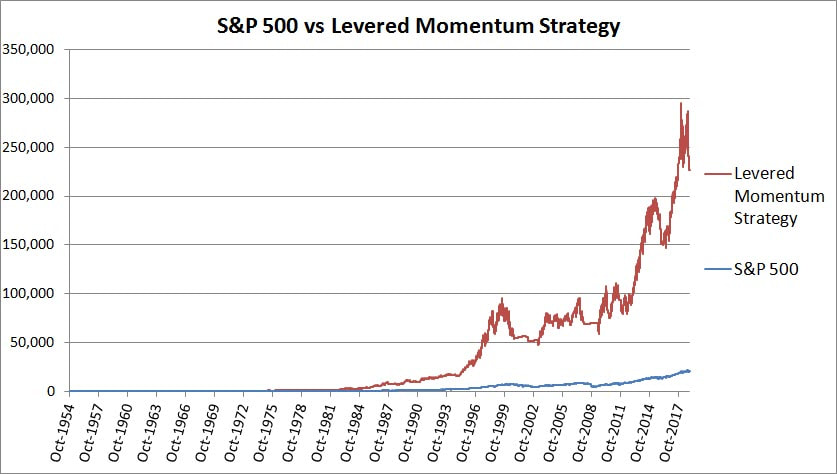 Backtest Assumptions: when not long S&P500 the Strategy's returns equaled 90day Tbill rates, and when Levered the borrowing costs were 90 day Tbills + 2%. Transaction costs assumed to be $0
​Below is the same data, but using a log scale for the Y-axis to make it easier to compare the strategies. 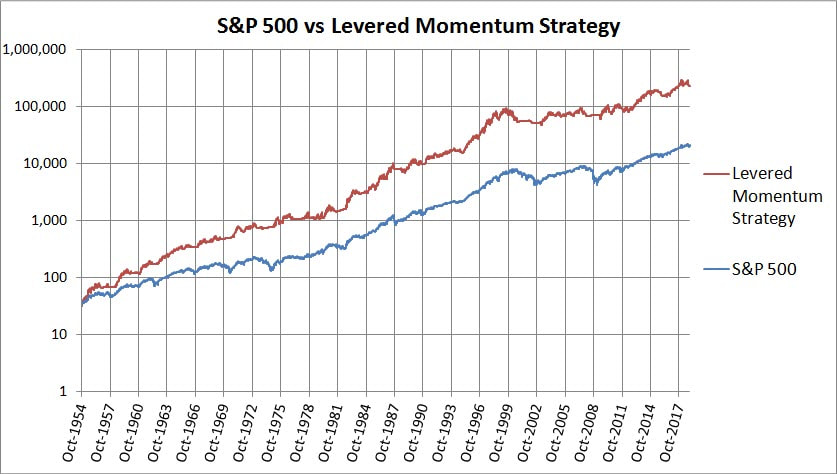 Cumulative Return Including Dividends, 10/18/1954 thru 12/3/2018
Should we all be employing this strategy in our endowments?
​When I read the subject I clicked the link as intended, primarily because I was curious to see what additional risks had been taken to crush the market so thoroughly over such a long period of time.

From 1928 to 2019, Momentum has outperformed Mean Reversion in the S&P500, which this strategy's results confirm.  But, to crush the market by 16%/yr for 90 years requires something more than only relying on Momentum, something that adds risk, which is typically leverage like this strategy uses.  The strategy is:
So, should we all be employing this strategy in our endowments?

As usual, the devil's in the details.  In the case of this strategy, most of its out-performance occurred prior to 1980, and its recent performance has been worse than the market.  For example, below is the performance from 1/4/2010 to 3/18/2019: 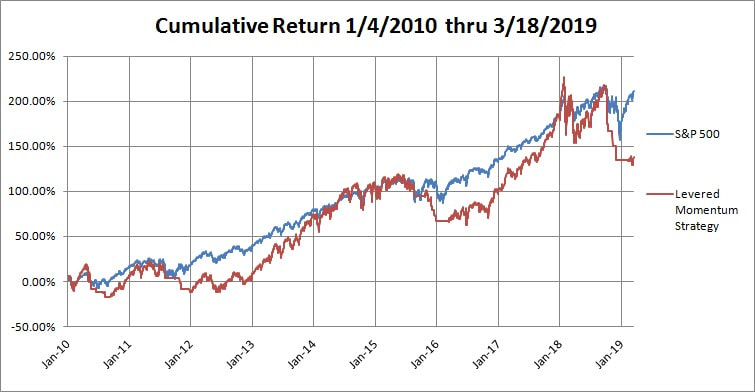 As illustrated in the above graph, the levered momentum strategy's cumulative return since Jan 2010 was less the the S&P 500's, and its volatility, or risk, appears to be higher.  Let's look at the risk/reward ratios more analytically. 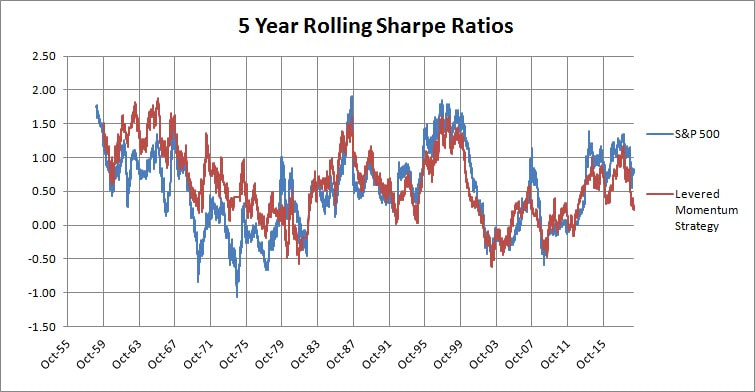 The Sharpe Ratio calculation used was: Sharpe Ratio = (Annualized Return-Tbill return)/StdDev of Returns
Below plots the rolling Sharpe Ratios using market data back from Jan 2010 thru Mar 2019, which shows how this particular Momentum strategy's risk/reward ratio has been worse than the market's since 2010:

The Sharpe Ratio calculated on performance from Jan 4, 2010 to Mar 18, 2019
Conclusions?
School endowments should avoid using levered, market-timing strategies like this.  Not only has this strategy been under-performing the market since 2010, its 2X leverage means it exposed investors to 2X risk until it switched to T-bills, which it didn't do quickly enough in late 2018, resulting in greater losses than the market.

​Even more damaging was how it subsequently stayed out of the market during the rebound: 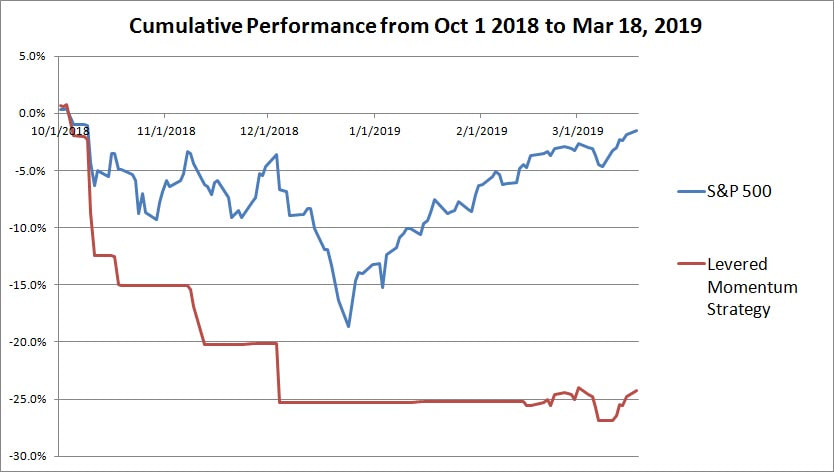 Missing out on the upside of asset class returns is one of the primary risks of market-timing strategies, but schools face the additional risk of boards and committees not understanding the nature of the risks of active and levered investment strategies.  This uncertainty exacerbates fear when losses start to mount, and can cause schools to panic and sell at the worst possible times.

Of course, the levered momentum strategy will outperform the market again in the future, and perhaps its recent under-performance means it's ready for a come back?  But I doubt it will come anywhere close to the outperformance it enjoyed prior to 1980, due to the modern era's massive increase in algorithmic analysis of the market, and how the resulting trading affects market behavior.   The future will continue to remain an unknown, so timing the market well will still be required to capture when Momentum outperforms Mean Reversion, and if you can do that consistently, then money will be the least of your concerns.
​​Wade Vagle, CFA, CAIA​
Get in touch at Wade@SchoolsThatLast.com