SCHOOLS THAT LAST
​
How Markets Fool Algorithms, and Us 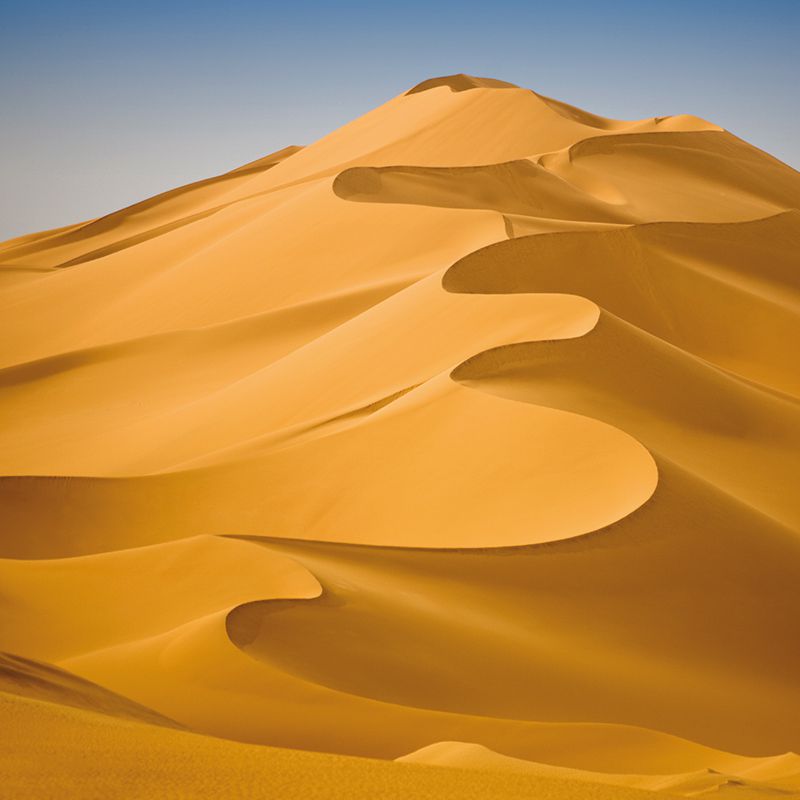 Curve fitting market data can increase prediction errors
​Data science used to be the domain of statisticians, scientists and Wall Street quants, but thanks to the ubiquity of data and open source libraries, all of us can now develop powerful, predictive models. Of course, these models also have the power to breed overconfidence, especially in the stock market where data, models, and randomness abound.

The discipline of Statistics was designed to help us avoid getting fooled by data and models, but not all of us have the time nor inclination for a rigorous study of Statistics. Fortunately, as the following simple simulations show, it’s easy to get a feel for how misleading predictive models can be by training algorithms on random data.
​
"Fooled By Randomness" - Nassim Taleb
Curve fitting, or the process of finding the function that best tracks a series of data points, isn't always a bad thing.  In domains like the game of chess, or face and voice recognition, curve fitting can be an efficient approach, and it's fundamentally what Deep Learning's neural networks do.

But curve fitting can be dangerously misleading when trying to predict future market behavior from models fitted to past market data since: The problem with curve fitting markets occurs on the right side of the curve, where models attempt to predict the future.  This is easy to see by applying curve fitting algorithms to random data, where more complex models can easily find patterns and relationships between dependent and independent variables that don't actually exist, and make predictions with high statistical confidence that are actually more prone to error.

​Part 1:  Datasets with one Dependent Variable (Y), and one Independent Variable (X)
​
​Let's start with a simple linear regression of 100 Y values randomly chosen between 0.9 and 1.1 with an expected mean of 1.  Linear regression's curve fitting algorithm finds the slope and intercept of the line that best approximates the data points.  In other words, it finds the slope and intercept that minimizes the error between the Y points predicted by the line, and the observed Y values. 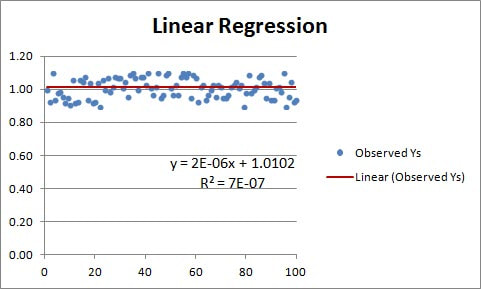 ​
As can be seen in the graph's equation above, the slope of the red regression line is nearly zero, and the intercept is 1.  But what is more noteworthy is the tiny value of R-Squared, which basically tells us that the proportion of the changes in Observed Ys that is due to changes in X is only 0.000007.  In other words, the tiny R-Squared tells us to have very low confidence in this model's ability to predict the next value of Y when X=101.  ​

So, it's not a useful model, but at least it didn't mislead us to use it to make predictions.

However, if we increase the model's complexity and solution space by adding exponential terms, or by adding more factors, then the algorithm will be able to find curves that track the data more closely, and the R-Squares will rise.  For example, notice how adding an X squared term in the next Polynomial Regression increased the R-Squared dramatically from 0.000007 to 0.1017, indicating that 10% of the variability in Y is due to X. 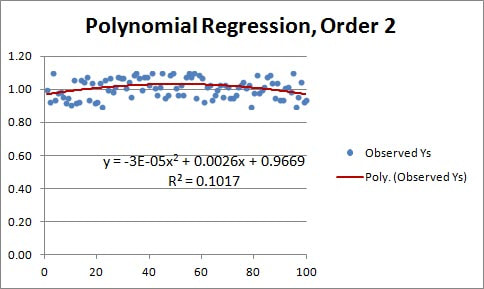 ​
Increasing the polynomial order to 5 further increases the R-Squared to 0.1684.  Such curve fitting may not be misleading if there was a persistent exponential relationship between Y and X, but this data is random. 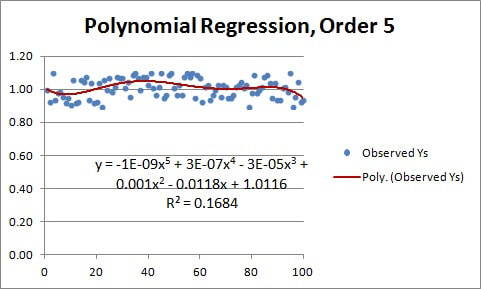 In the following animation you can see how switching to more complex polynomial models increases Y prediction errors for X=101, while simultaneously increasing the confidence in the predictions as indicated by the higher R-Squares:

​
Part 2:  ​Data sets with Multiple Independent Variables (Xs)
​
Most real world phenomena are caused by multiple independent variables, or factors,  so it usually makes sense to build multi-factor models.  But adding factors also increases the risk of curve fitting, since each additional factor increases the model's solution space exponentially, and hence its ability to find a curve that better tracks the observed points, but not necessarily the out-of-sample points.  This is especially true in the case of markets with all their random noise.

The following animations show why you should be wary of curve fitting and model complexity when modeling data sets with a high degree of randomness. In these simulations the Independent and Dependent Variables were given 100 random values between -10 and +10 with expected means of 0.  Then, multiple regressions were performed which generated optimized Slope values for each X factor, and these Slopes (or Weights) were used to plot the blue Multiple Regression line, alongside the observed Y points plotted in red.

First, here's the simplest model, which regresses Y against only 2 Independent Variables.  Notice how low the R-Squares tend to be, indicating that the models do a poor job at explaining the variability in Y's value, and that they shouldn't be relied on for predicting future outcomes.

Next, the number of independent variables is increased to 16, providing the algorithm with a much larger solution space in the random noise to search for a curve with a better fit, and the R-Squares rise as a result:

Part 3: Curve-Fitting Price and Compounded Return Data
​
It's even easier to fool ourselves by curve-fitting price and compounded return data sets.  Below the random Y-values and 16 X-factors were treated as returns and compounded independently.  Then, the compounded Y values were regressed against the 16 compounded X-factors.

​
Of course, since the data is random the curve fitting algorithm is simply finding patterns in the noise that will not be repeated in the future.  Below the data is extended for 30 points beyond the in-sample training data, which shows how worthless these curve-fitted models are for explaining out-of-sample data:

​Hopefully this helps to highlight how easy it is for randomness to fool algorithms, and us.  To me, the most sobering aspect of the above forecast is that most actual market activity is also random noise, implying that we can fool ourselves just as easily when backtesting with actual market data.
​
Conclusions?
Write an algorithm to search for faces in clouds, and if given enough noisy data, it will find them
​​Wade Vagle, CFA, CAIA​
Get in touch at Wade@SchoolsThatLast.com